Leonardo Baptista: The Resilient Big Dreamer and a Successful Disrupter 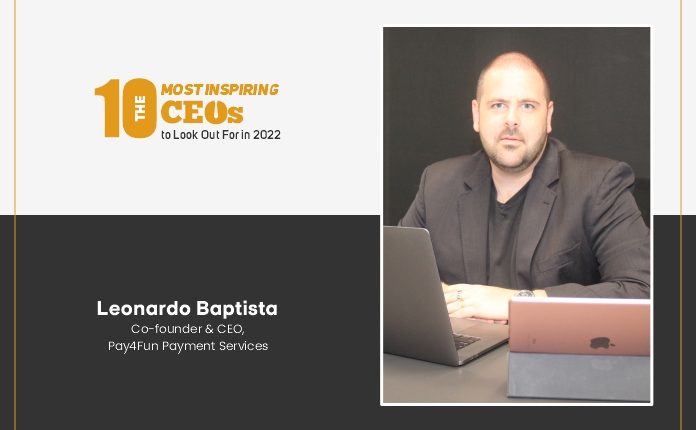 Leonardo Baptista is the resilient Co-founder and CEO of Pay4Fun Payment Services. For him, resilience is about not being afraid of failing, not being afraid being beaten, and not being afraid of being knocked down. He faces adversity with determination and a good spirit and has a remarkable ability to bounce back from failures. “Get up and come back stronger” is how Leonardo deals with difficult situations.

As CEO of Pay4Fun, he is responsible for the company’s image in the market. He also devises strategies to ensure Pay4Fun continued exponential growth. Ever since its launch, Pay4Fun has seen explosive growth. In just 18 months, the company started earning 7 times more than the amount invested, per month. Leonardo also actively takes part in fairs and national and international events to build a relationship with customers and potential partners. At events, he is eager to experience not only his own business but also that of their partners, as he believes only then they would know how to do it the right way.

Rather than seeing a challenge as an obstacle, Leonardo turns it into an opportunity. It is one of the reasons why he is very successful and an inspirational leader. The other reason is his shared leadership. He makes sure that Pay4Fun’s employees are part of everything and aware of the company’s achievements, each new customer, and each new market. Then, he also shares the merits of these achievements, with bonuses, recognition, and career plans.

Leonardo attributes Pay4Fun’s success to not only his leadership but also to the partners and the entire team of employees of the company, who make everything happen.

Leonardo co-founded Pay4Fun in 2018. It is an online payment processing corporation, which allows consumers and merchants to make transactions quickly, conveniently, and safely. Pay4Fun is a disruptive technology.

Even before he founded Pay4Fun, Leonardo was very much focused on the technology market – where he also had his first internship at the age of 14. He graduated as a systems engineer at Microsoft, and after exploring the technology space, he ended up in the games and entertainment arena. He worked there for 13 years.

Leonardo started his career as a professional hacker. Leonardo recalls that he broke into systems of large companies in the financial market to assess possible flaws and suggest changes for cyber prevention. After a few years and working at other companies, he became COO of one of the biggest gaming platforms in Latin America. But he wanted more. His big dream was to merge his two passions, the universe of games and digital security, and create something innovative for the digital space. In 2018, he decided to take the plunge into entrepreneurship and make his dream a reality, as he noted a big gap related to financial aspects of online gaming sites in the Brazilian market.

“That’s when Pay4Fun was born, physically shy, occupying only one room, but grandiose in the future goal that was quite audacious for a young entrepreneur,” says Leonardo. “That’s because I knew the great potential of P4F and was able to count on great partners who jumped into this entrepreneurial journey with me.”

Entrepreneurship Is a Challenge

Leonardo considers entrepreneurship as a challenge in itself, as it entails the burden of taxes and legal uncertainties. Running a new business has its set of challenges as well. But, at the same time, there is a sense of gratification at being able to create a company with the values, mission, and vision in which one believes. Leonardo adds that it is also gratifying to know that what one is creating is going to foster an entire production chain, move the economy, and which will ultimately give back to society in the form of products and services.

“Yes, challenges test all of us all the time, test our resilience and ability to make it happen beyond obstacles,” Leonardo says. But they can be transformed into learning. He also points out that when the world was going through the Covid-19 pandemic, no one had the slightest idea about what was ahead but still new opportunities sprung up. “It proved to us once again that the crisis can also bring opportunities,” says Leonardo.

“We ourselves, at Pay4Fun, felt the reflection of people inside their homes and increasingly seeking the internet as a refuge, fun, and survival,” he adds. It is then that the company expanded its horizons and created its own prepaid credit card to make life easier for its partners and customers. It turned out to be an extremely important step to help the unbanked, without credit in conventional banks. Leonardo explains that they offered them the opportunity to have a credit card to enjoy entertainment services and even delivery, which was essential during quarantine and lockdown.

Leonardo is intensely dedicated to whatever he does. “What marked the beginning of my career, since my first internship, and continues to accompany me even till today is my dedication,” he says.

And, as someone who has always looked at jobs with passion, he tells everyone who works with him that they have to have a love for what they do. “If your professional life only makes you complain about Mondays and celebrate on Fridays, something is wrong and you need to rethink your career,” Leonardo points out. “Because if you don’t have passion, you won’t dedicate yourself fully, and in a light and pleasurable way.”

For Leonardo, the best recognition of his career is: joining Pay4Fun and looking into the eyes of each of the employees who dedicate themselves day to day with him in this business and see how much they enjoy being there.

The work environment at Pay4Fun is pleasant and everything flows.  The company has been growing year after year by 100 percent and 200 percent, and according to Leonardo, the passion for making things happen is what maintains these results. And, although today’s assignments occupy a high external routine, he makes it point to be with the team whenever possible, talking, recognizing those people who are together, and enabling everything to work in the best way for everyone.

“As out of fashion as it may seem, seeing everyone happy and together in this purpose is the main award as CEO and recognition of my career,” adds Leonardo.

Success Is the Result of a Trajectory

For Leonardo, the word success is small but with many meanings. “That’s because, in my view, success is the result of a trajectory, which is often surrounded by obstacles that will lead you to the top of success,” he says.

He really likes this quote from Dropbox Founder Drew Houston, “Don’t worry about failures; you only need to get it right once.” Leonardo explains that when one is determined to make things happen, they study, plan, trace various scenarios and routes, unite with people, so that the goal is reached. It, however, does not mean that the path will be free of obstacles. Adversity is part of the process of achieving success, and therefore, according to Leonardo, giving up is not an option, and looking at the mistake and regretting it won’t make one act.

He believes in being focused and determined so that one can turn challenges into new opportunities, recalculate the route, and tirelessly overcome them themselves. “Success is a consequence of all this effort and, believe me, it is gratifying when you get to conquer this place,” says Leonardo.

Living Life as If It Were Last

Both in his professional life and personal life, Leonardo’s mantra is to live his life as if it were the last. “Obviously, I don’t mean about being inconsequential,” he says. “We need to have our time, family time, with friends, enjoy and enjoy what you’ve been conquering.”

“Enjoy your salary, your bonus, your profitability, and life. Live one day at a time, whether to watch a series on Netflix or take that trip you’ve planned. Enjoy the fruits of your labor,” he adds.

Leonardo has an active, restless spirit, and a pulsating mind. He always dreamed –and still continues to — of conquering, and he has successfully done that several times.   “I would say that I’ve accomplished many things that at the age of 19 I didn’t even imagine would be possible, but the “me” of the next decade knows that there’s still much more to come,” he says. “And I say that both professionally and personally.”

“But if you want to know if I’m happy with everything I’ve conquered? Oh yes, for sure! But life is made to be explored to the fullest, so I already have projects here in my head to be planned and soon to be executed.”

Pay4Fun is innovative in its own right. So, according to Leonardo, they are directly involved in projects, including in the legislative sphere, for the disruption. For example, Bill 442/91, which provides for the new Legal Framework for Gambling in Brazil, is an important debate in the Brazilian betting market, reported by Deputy Felipe Carreras (PSB-PE), which regulates online games. Leonardo actively participated in public debates in favor of online games as he believes it is an immense revenue opportunity for the country. According to data from the Instituto do Jogo Legal, it is estimated that online betting, which currently moves around R$ 10 billion a year, will reach R$ 100 billion annually as soon as they are regulated, formalizing 450 thousand jobs and creating another 200 thousand.

Leonardo believes they still have plenty of growth opportunities both in the games market – the perspectives with the regulation of online games are very promising — and in banking technology. For example, the cryptocurrency market and all the possibilities that blockchain offers can add to the disruptive financial market.

Leonardo and his team plan to ​​​​launch products such as cashback, accounts for minors, QR Code for physical shopkeepers, and recurrence for virtual shopkeepers. The year 2022 is set to be the year of expansion for Pay4Fun.

As someone who has made his big dream a successful reality, Leonardo’s message to other aspiring entrepreneurs is to put everything on the paper, all their business ideas and future plans. He also says they need to study their market and ally with people who have a similar purpose.

“And, finally, to believe in yourself every day, to fight, not to get down with the first obstacle, to understand that we are not always going to make the best decision, but that this is part of the path to success,” Leonardo adds. “And never forget to recognize who is with you in this battle and value them.”

Vijay K Singh: Striving for Excellence while Climbing the Ladder of Success